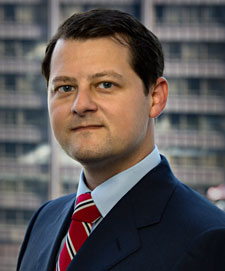 Judson M. Graham is the managing founder of the Judson Graham Firm. He concentrates his legal practice in the areas of wrongful death, medical malpractice, and personal injury litigation. Mr. Graham received his law degree from the DePaul College of Law in 2012. While at DePaul, Mr. Graham received a CALI award, for the highest grade awarded to a student in the Litigation practical skills course, Litigation Laboratory. Over the past decade working at plaintiff’s firms, Mr. Graham has established himself as a trusted advisor to hundreds of past clients, as well as a resource to other attorneys in the field.

Mr. Graham received his undergraduate degree in English with a minor in Business Administration from the University of Arizona. Through high school and college, Mr. Graham worked as a law clerk on the trial team of a AV-rated eminent domain litigation firm in Phoenix, Arizona. After graduation, Mr. Graham moved to Chicago where he worked in corporate public relations and strategic corporate communications.

*Note that the results listed here are for illustration purposes and are not intended to imply anything regarding any future case or claim. Note that these results include matters handled in whole or part at past firms where Judson was employed prior to establishing The Judson Graham Firm LLC.